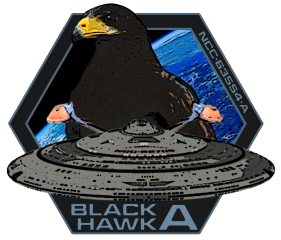 Read Our OOC and IC History

Commissioned in 2388, the USS Black Hawk-A, the second starship to bear the name, continues a great legacy.

The first iteration, an Akira-Class vessel under the command of Captain Mitch Bueller, launched in 2373 during the height of the Dominion War and saw plenty of combat. Captain Bueller was an excellent tactician and was given the responsibility of commanding the entire Starfighter Wing for the Third Fleet. Under his direction, the Black Hawk led many successful missions during the war.

As Task Force 9 expanded deeper into the Gamma Quadrant, the Black Hawk was refitted and reassigned to join the Task Force, accepting Commander Harvey Geisler as the first Commanding Officer to take her into the edge of known space. Commander Geisler assumed command in late 2387. As he led the ship into the far reaches of the Gamma Quadrant, the mystery of the frontier became Harvey's new obsession, wanting to uncover truth and make an impact much like he did as a young lieutenant who worked feverishly to cure disease and pestilence. Ultimately, the ship met her end against the foul Consortium, crash landing on New Bajor.

Now, Captain Geisler is assigned to command the successor to the Akira-class starship and is plunged towards his destiny. But only time will tell what that destiny will hold...